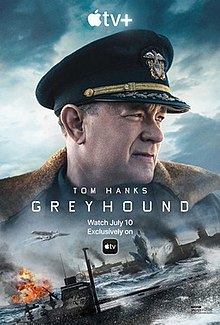 Greyhound doesn’t give anything spectacular, but the grounded action is thrilling to watch!!!

-For Tom Hanks he acted very well which is expected, but the fact that he wrote the screenplay I am impressed, I know writing a story like that is not easy, and Hanks really did well with all the details it entails
-The film is 90 minutes, and that was perfect, it got to the point of the story, and you just sit back and watch how it all unfolds

The action wasn’t anything spectacular, no type of Michael Bay, Roland Emmerich, or even Antoine Fuqua, it is a grounded World War II naval war movie, it brought a sense of realism to what is really like during that aspect of this war, and I appreciate that, with that said, it can make it boring at times

-The film is pretty much the point of view by the commanding officer, which is fine, but it does sacrifice the character development of everybody else, and there was a lot of naval jargon which can get redundant and flat for a movie, they might as well got rid of the beginning part of the commanding officer and his love interest, and just get on with the battles

It’s a good grounded historical naval war movie, but don’t expect anything spectacular that you may be use to. Though the groundedness in its action and the tense moments does make it good to watch. Tom Hanks really does what he does best, and you can just appreciate taking on a role of leadership in this film, and see how it goes down in history!!!