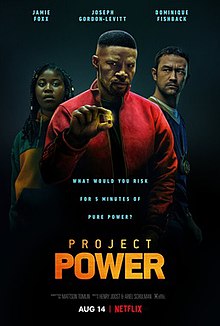 Project Power had an interesting premise and good acting, but it seems to forget to have an effective story!!!

-The acting by both Jaime Foxx and Joseph Gordon-Levitt were pretty good, I enjoyed their characters very well

-The premise of this film is very interesting and unique, but unfortunately the execution wasn’t effective enough, it should’ve been something great, but in the end it is just a typical drug and action film
-The action had some cool moments, especially seeing the super powers the people get, but there was a lot of shaky cam and fast editing that was very distracting

-They had some subplots that really could’ve made this movie a lot more effective, but in the end, not effective, not something that we can relate to, just a mindless action flick

This film had a lot of potential, especially with its premise and actors. Unfortunately it was a typical film with some decent action, but nothing effective to make this film really good. Some wasted opportunities to make it relatable, but it failed in that regard. It’s unfortunate, but it is what it is!!!