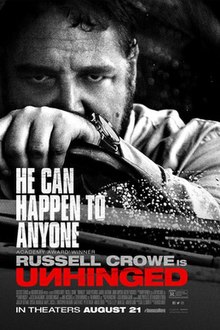 Unhinged had some thrilling moments and good acting, but in the end, it is a usual thriller!!!

-Russell Crowe acting as a psycho was pretty intense, all this for a simple act of road rage, he goes berserk on his victim of his road rage

-I would say the first half of the movie is pretty thrilling at times, you didn’t know what the villains endgame is, however, once it reaches its climax, it was just a typical thrilling action film involving a psychopath

-It is not as gritty I thought it would be, but lets be real, what are the chances that you honk at somebody like a true jerk and get harassed by a psychopath, I’m from Boston where road rage is at its highest, and you don’t hear stories like that, maybe a fight, but that’s it, with all that said the 3rd part of the story was just very underwhelming

It started off intriguing, but then it pretty much went downhill from there. They try to put a message about road rage, but it was not effective whatsoever. With all that said, if you want to see some intense acting by Russell Crowe since Gladiator, this is the film to watch. Now I’m going to keep on road raging when somebody cuts me off!!!