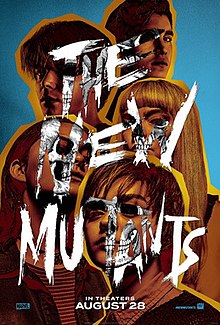 The New Mutants is different with its theme, but the story is underwhelming for what it promoted!!!

-I liked how it tried to be a different X-men movie, it is the thought that counts
-Demon Bear looked really cool with its special effects and horrific look

-It tried to be a horror movie which at times you can see those scary scenes which I give them props for, but all in all it didn’t really achieve what it suppose to do cuz I wasn’t really on my edge of my seat
-The final fight was cool to see, but the thrills were at its minimum

-The character development felt rushed for everyone, I didn’t really feel effectiveness for each character, and it did leave it to the underwhelming final act
-Anya Taylor-Joy as Magik was the worst character to me, she was the stereotypical bully for no real reason, and her accent seemed uneven, like you hear it most of the times, but at times, you hear regular English
-With the horror tone and a X-men movie, I did feel underwhelmed with what it brought out

As I said before, this film feels underwhelming. It didn’t really deliver in what it promised. I believe the fact that it was a planned trilogy, it really left with a lot of loose ends and a lot of underdeveloped story and characterizations. Now that we know this is the final X-men film in the Fox franchise, it was one heck of run. Though I’m excited for the future in the Marvel Cinematic Universe, I’m disappointed with the way it ended. It made a great franchise end on a low note which doesn’t give it justice for what it brought out. Still, I will always appreciate what the X-men films brought out, and it is something I will truly cherish in my life of movie watching!!!