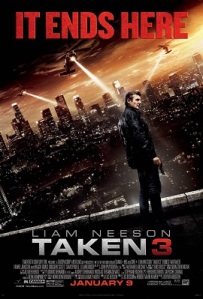 (Critic Note- As I start off the 2015 movie critiques with my new and improved movie critic blog, i just want to thank once again for all of your upport. Let’s start this new year of movies with a bang.)

Taken 3 is what I thought it would be, a very unnecessary sequel with a weak and predictable story, with action that will at the very least make it watchable.

The movie Taken had to be one of my favorite movies of the past decade. This movie really created a comeback of some sorts for Liam Neeson as an action star who has a certain set of skills. The movie was fun, thrilling, the right amount of darkness, and most of all, enjoyable. That movie started to respect Neeson as a BA actor, and enjoyed most of his movies after that. Then I heard a sequel was coming, and to me, I was like, “She gets taken again?” Fortunately, the story was better than that, but Taken 2 lacked the intelligence of the first movie. The sequel wasn’t necessary, and should’ve kept it with just the original. Great movies usually lose their spunk with terrible sequels and it is unfortunate. So when Taken 3 was announced, all I can do is rolled my eyes and accept the fact that this franchise needs to over quick before they make this movie franchise pathetic. Unfortunately, I was right, and I’m deeply saddened by it.

The So So: The action of this movie made it somewhat decent to watch and make it not a total waste of time. However, some action scenes got to Fast and Furious status. Meaning, unrealistic and sometimes down right stupid. Two examples, one is where a truck carrying a cargo box crashes to the side, but all of a sudden the cargo box snaps out and does a leap to roll about 50 times. (You have to see it to know what I’m talking about.) Also when Bryan Mills, played by Liam Neeson, drives a car to an elevator shaft, and gets out before the car blows the whole shaft. This kind of action would make Michael Bay cringe with disgust. Overall, the action and fight scenes were, at the very least, watchable.

What I Didn’t Like: How can you call a movie Taken, when no one gets Taken? (But Bryan’s ex-wife Lenore, played by Famke Janssen, got her life TAKEN away.) No, that really takes away this franchise schtick. The story is weak and predictable, Bryan’s ex-wife gets murdered, police thinks he did it cuz he was at the scene, he fights his way through to solve the murder and pretty much exonerate himself, and has to beat up a Russian to do it. (Why is it always the Russians? Thought the Cold War was over? Screw you Putin.) There is the subplot that Bryan’s daughter, Kim played by Maggie Grace, is pregnant, and surprised Bryan doesn’t use his certain set of skills to kill the guy who knocked her up. Then the movie really tried to make a twist where really it was Lenore’s second husband, Stuart played by Dougray Scott, set up the murder so he can collect the insurance coverage on her to collect a debt, and set up Bryan so he can kill the guy he owes and walk away with the money. (Sigh) Seeing Forest Whitaker playing LAPD Inspector Dotzler, who is trying to chase Bryan, eating bagels was more interesting to watch. Also, this movie really tried to be like the Bourne movies, but those shaky cameras and quick changing editing really gives you a headache. It’s a shame that this once great series, has surcome to this.

Overall: The second sequel was unnecessary, so this sequel was super unnecessary. I hope there will be no more sequels to further ruin it. I will from now on, pretend this sequel never happened, and continue enjoying the original Taken movie!!! 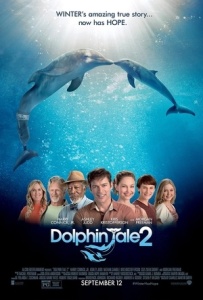 (Sidenote: Dolphin Tale 2- The first movie was a feel good movie for kids that reminded me of the movie Free Willy (keep laughing you perverted people) a movie a loved as a child. Dolphin Tale 2 is more of the same, only with a weaker story line. It is good for the kids, but only real dolphin lover adults will enjoy it with their kids. That’s about all I can say about this movie.
Rating: 2.5 Stars)

(Sidenote: Foxcatcher- This movie is guilty of Oscar overhype. Meaning, a movie I haven’t seen yet, because it is only played in select theatres, get some Oscar nods, and when I watch it, I didn’t like it. (Watch out Boyhood.) This movie gave Steve Carell an Oscar nod for Best Actor, and Mark Ruffalo for Best Supporting Actor. However, the best acting in this movie really goes to, and I can’t believe I’m saying this, belong to Channing Tatum playing Olympic wrestler Mark Schultz. You see a gold medal winner who is shadowed by his older brother Dave Schultz, played by Mark Ruffalo, who is also a gold medal winning Olympic wrestler. Mark is trying to break from his shadow, and dives into an opportunity to train and coach at Team Foxcatcher, a team sponsored by billionaire John du Pont, played by Steve Carell. Pretty much the story of this movie was very interesting dealing with betrayal and possible emotional psychoticness. However, the movie pretty much dragged around the interesting parts. When the climax of du Pont killing Dave Schultz happened, instead of being shocked, you’re like whatever. This movie could’ve been much better than what it is for this interesting story. Now I see why it didn’t get the Oscar nod for Best Picture (and adds fuel to my fire for the Selma snubs). Only thing interesting for Steve Carell’s acting was really his make up, nothing really was groundbreaking or exciting. Same for Mark Ruffalo. Channing Tatum deserves some credibility, but I’m not going to say he deserves an Oscar nod. If you like Olympic wrestling, you will like this movie. If not, it is a whatever movie.
Rating: 3.5 Stars)