Mechanic: Resurrection is a typical action movie starring Jason Statham, if you love his action movies you will get it, but if you are expecting more, you will be greatly disappointed!!!

I can’t believe I haven’t talked about Jason Statham in depth yet. What can I say about him? I first saw him in The Transporter which was pretty early on in his career. I wasn’t a big fan of him in is early movies. His action scenes felt so forced and fake that it was obvious he didn’t do most of his stunts like Jackie Chan or Tom Cruise. It wasn’t until the film The Bank Job when I kind of saw potential in him. He is unique with his raspy British voice, and tough guy demeanor. That’s what works for him. His movies have become a lot better as of late, and he turned himself into a cool action movie star, and added comedy to his resume in Spy. It’s not like I have to see his movies, but when I do, it is not a waste of time. That was my opinion for Mechanic: Resurrection, I thought the first movie was ok, so I wasn’t hyped to see this film. It looked like a typical Statham movie, and as it turns out, I was right.

What I Like: If you are looking for action Jason Statham style, that is exactly what you get. You get the usual things with him: shaky cam fighting, a lot of explosions, and action scenes that are too crazy and defy basic physics. (If Statham and Michael Bay made a movie together, the world could not handle it.) If you’re a fan of that, this movie is watchable. My favorite action scene is when he is in an underground cave with a submarine killing thugs one by one. I did enjoy how Statham’s character, Arthur Bishop, always comes prepared and has something up his sleeve every single time. I also enjoyed how he MacGyvered his way to assassinating a guy swimming in a pool high up in a skyscraper. He made a chemical formula that makes glass crack resulting in his target falling to this death. Those types of scenes really made it entertaining.

The So So: This film featured the beautiful Jessica Alba playing Bishop’s love interest. Even though she was important to the story (more on that later), their chemistry was really awkward. The way they started their relationship was just dumb, but at least Alba is nice to look at.

What I Didn’t Like: The story was just too typical and simple. A guy trying to get away from his past life, gets found, gets blackmailed to do a job, and finds a way to survive in the end. In this case his blackmail was so cliché. All he’s doing is save his love interest whom he just met. If you watch this movie for a good story, you will be disappointed. However, I believe people don’t watch a Statham movie for a story. Last thing, Tommy Lee Jones was in this movie as Max Adams, a person Bishop was supposed to kill. This is probably the worst role for Jones that I have seen, because he really looked like an arrogant douche with the earrings and hippie facials. He wasn’t really a big part of the movie which makes me think that’s why he took this part to begin with. The fact that he survives in the end, was eye rolling for me.

Overall: If you love Jason Statham movies, you will get what you expect. Lots of action, explosions, fighting, and shooting. If you’re looking for anything else, you will be disappointed. But to be honest, who is watching a Statham movie for the story and not the action. Nobody really. So with that philosophy, that is what you get!!! 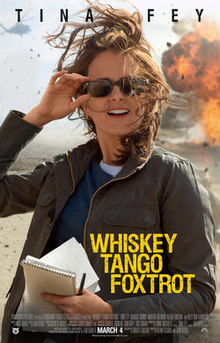 (Sidenote: Whiskey Tango Foxtrot- This film stars Tina Fey as a journalist covering the war in Afghanistan. I approached this like a comedy, but it barely had any funny moments. Funny lines, very rarely, but as a comedy, it failed. As a drama, it was intriguing, but in the end, it lacked any real point for the story of this movie. In the end, I really didn’t care what happened to her, but was interested in the politics of the war in Afghanistan which it kind of focused on!!!
Rating: 3 Stars)