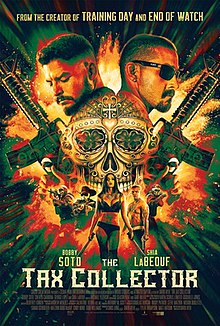 The Tax Collector is a typical gangster movie we all have seen, at least it was engaging enough for me to care!!!

-I do like a good old gangster film, even the bad ones, this film did have my attention from beginning to end especially dealing with Mexican gangs in South Central LA

-The acting was a mix bag some were good like the protagonist Bobby Soto and Jimmy Smits, some were bad like the main antagonist, Jose “Conejo” Martin, and some that were laughable because I can’t take them seriously as gangsters like Shia Lebouf (more on him later) and George Lopez, I love you George Lopez, but being a gangster is not one of your good things

-The movie is a formulaic gangster movie, where they have to deal with rivals and tragedy, and the characters are the typical characters for this kind of movie, I practically predicted what’s going to happen until the end
-I still don’t understand why Shia Lebouf was casted for this movie was the enforcer, his acting was laughable, but at the same time, I was offended because they could’ve casted another actor with Latino origins to play his character instead of whitewashing it with Lebouf, and what’s the point of Lebouf getting a real chest tattoo for his role when you barely see it, so many wrongs with this character

It does have its formulaic flaws, and other issues (Shia Lebouf). With all that said, it was still engaging to see how this story went down. I just wish there was something more inspiring for these characters instead of seeing the same old thing!!!