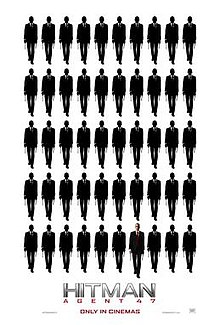 Hitman: Agent 47 was too outrageous in a bad way, the story was sloppy, acting was subpar, the special effects is too forced, and it seemed that they try to hard to make a great movie, but rushed it horribly, and it didn’t give justice to the franchise.

I am a fan of the Hitman video game franchise. It is a fun game where you carry out assassination missions, and have to go through some fun obstacles to complete your mission. It was challenging enough for me to enjoy the video games, and becoming Agent 47. All the games are fun and the more they make, the better they have got and the more entertaining it is. When they came out with the first movie of Hitman, I was all in. I thought the movie was decent, even though the story was shaky. I thought the movie gave justice to the video game franchise, and only true fans of the game will definitely enjoy it. I was right, but to every one else it wasn’t good enough to a point no sequel was made. Then when they announced a reboot of the Hitman franchise, I was in once again, until I saw the trailer. I had my doubts, but I hoped that it stills gave justice to the great video game franchise. Unfortunately, I was wrong.

What I Like: Director, Aleksander Bach, showed some nice cinematography of the city of Singapore. A city where not mich actually know how cool of a city it is with a cool skyline, especially at night. In this regard, the movie gave Singapore some justice, and maybe boost some tourism sales.

The So So: Zachary Quinto played the enforcer villain of this movie named John Smith. An agent for The Syndicate agency who are looking to find the creator of the bioengineering assassins experiments that prove to be successful but unethical. Quinto does a good job play BA villain, and showing some cool fighting and shooting skills that show he is not an easy fight to win. However, the movie also made him arrogant that played to his cliched downfall. The fact that he has impenetrable skin really made this movie take a cheesy turn as well. At least Quinto does his best with what he got, and can move on to play a BA Spock in the next Star Trek movie. Ciaran Hinds playing Dr. Litvenko, the creator of the bioengineering assassin experiment, played well in his role as well as a scientist with a lot of remorse in what he created, and had to make major sacrifices which he included his family. I wish the movie focused more on him than his horribly written daughter, Katia van Dees played by Hannah Ware. Maybe the movie would’ve been better in that regard.

What I Didn’t Like: Let’s start with Rupert Friend as Agent 47. He is BA thanks to movie direction, but his acting really made him not so serious to believe that he really is BA. At least Timothy Olyphant acted better in the first Hitman movie, but Friend, all I can do is shake my head in disgust. He is probably worse than the voice acting in the video games. He is side kicked with Katia who ends up being Agent 90, another assassin, and out of nowhere develops the skills to help Agent 47 take on the Syndicate. She starts off innocent and searching for a person who she doesn’t know (weird and written horribly), and realized she is an assassin and develops her skills overnight. (Ugh!!!) Thomas Kretschmann plays the main villain, Antoine LeClerq, who is the head of the syndicate, and wanting the formula to create more assassins. He was a weak villain where he calls the shot behind a desk, and when things start to go down he escapes like a weakling. Another weak role for Kretchmann playing a big villain, but being killed off quickly. As for the action, I only give a little credit for the fight scenes, even though the shaky cameras got too much, but the CGI in this movie looked cheap and horrible which really bothered me. Some action scenes were so outrageous that you couldn’t take this movie seriously from the start. A good example was the sniper shot from miles away marking Katia, and the training scenes with a jet propeller where it seems to suck some people and things to their destruction, but not for the main characters. For this movie, I expected more blood and gore, but barely got it which greatly disappointed me. Maybe the bloody action would make this movie better, but barely got anything. Instead we get a horribly directed scene of Agent 47 doing what he does best, in a room with flashing lights that make it go dark and bright, and it gives your brain a great headache. The ending where Agent 47 goes rogue, and is sent to be killed by Agent 48, and when it seems John Smith was dead by electrocution, but ends up to be alive in the mid credits scene, the movie officially took a turn for the worse in a outrageous way, and can honestly say the stories in the video games were better written than this movie. At least it was well put together, and not sloppy and confusing like this movie. It seems like they rushed to make this movie, and take their money and run without looking back, knowing this was going to be a failure.

Overall, this movie definitely did not give the franchise any justice. The first movie did a lot better job, and will still be remembered by me. As for this one, I will burn it in the fire if I ever see it near my Hitman games!!!

(Sidenote: Maggie: This movie stars Arnold Schwarzenegger in a post apocalyptic zombie movie, but it is not what you think. The post apocalyptic world is still intact, but with new laws to suppress the disease and the zombies that come with it. The main point of this story is Arnold Schwarzenegger’s daughter, played by Abigail Breslin, is bitten by a zombie and doesn’t have much to live for, and Schwarzenegger decides to not go by what the law says and keeps her in her house instead of going to quarentine. Even though it proves to be dangerous. Instead of this movie being scary, it took a more unique and emotional approach for a zombie movie, but it made it boring for me, and waiting till she actually turns to a zombie, just to see what happens in a underwhelming end. Doesn’t mean the acting wasn’t good.