El Chicano may be a plot mess, but I appreciate the culture it brings of Mexican-American culture!!!

-I like the gritty action it brings with the vigilante of El Chicano, and the fight scenes were pretty good
-I also appreciate how it brings out a little culture with Mexican-American in South Central LA (where I use to live as a kid), it connects with the story pretty well

-The acting was ok, some were good, but some were crindgy, the protagonist, Diego played by Raul Castillo, had an up and down showing acting wise

-The plot is a mess, it goes this way and that before it finally gives us a focal point, there is also too much ambiguity when it comes to the hero, “El Chicano,” which makes this hero underdeveloped in his character, so in that regard, it can be confusing like the story

I appreciate the effort of making a Mexican-American hero in the streets of South Central LA. I just wish they had better writers to make this movie really good. Though it does intertwine the Chicano culture very interestingly, and that I can appreciate. With all that said, it is mediocre at best, but for the none Mexican-American people, they will not understand it at all, unfortunately!!! 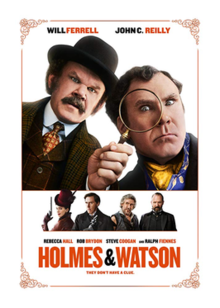 (Sidenote: Holmes and Watson- This is not Step Brothers. Not even close, and I’m not a fan of Step Brothers. This was pretty much stupid, and I’m surprised these good actors and comedians took this role. Not the worse comedy I’ve seen, but it is up there!!!
Real Rating: 2 Stars)