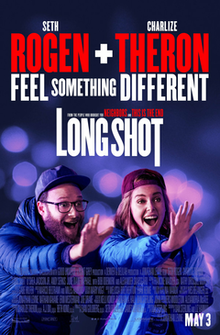 Check out our latest episode of our podcast, Real Movie News and Reviews, talking about the latest trailers and reviewing the latest movies, check it out by clicking the link below, and be sure to subscribe, rate, and review the podcast!!!

Long Shot is one of the best rom-coms I’ve seen in a while, mainly because the story and acting is good, even though the ending falls into those stupid rom-com tropes!!!

-I’m never a fan of rom-coms, but this one had a pretty interesting story, and the execution is pretty good, I actually cared to see what is going to happen
-I really enjoyed the chemistry between Seth Rogan and Charlize Theron, it really looked like there was something genuine

-The comedy portion for the most part was pretty funny, I enjoyed Seth Rogan’s character, Fred, rants about anything political, but there were some raunchy parts where I’m like, was it really necessary?

-The last part of the movie really falls heavily on the stupid rom-com tropes which was really disappointing for me, everything was executed well, but in the end, it laid its egg in the tropes that I do genuinely hate

It is not your typical rom-com. I thought it had a good and interesting story with some fine acting. It gives me inspiration that a guy like Seth Rogan can actually get with a woman of Charlize Theron’s caliber. Let alone, a powerful woman who happens to be Secretary of State and running for President. Yes the rom-com tropes at the end really is a sore spot, but in the end, Seth Rogan’s comedic charm and Charlize Theron’s elegance made it a spectacle to watch!!!