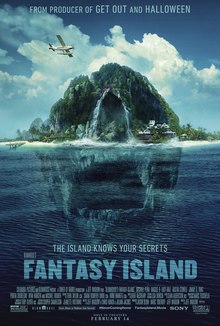 Fantasy Island had a lot of potential, but the conclusion just became a serious mess!!!

-The premise of this story was very intriguing about how not all fantasies will end well, the fact that I never watched the TV show is probably why I give this a higher rating, I thought the writing for the first two thirds of this film was actually good
-The cinematography of the island which is the island of Fiji, was awesome, it did look like paradise

-I thought the acting was decent, Michael Pena as Mr. Roarke was great, and I also enjoyed Maggie Q’s characterization as well, everybody else was a hit or miss but the character of Melanie was really eye rolling for me

-The last part of the film really came rolling down to a serious mess, at first I liked how each fantasy was intertwined with each other, but the twist and payoff at the end was just rushed, confusing, and really badly executed, it was a huge letdown, and the fan service in the end was just really stupid
-Having this film as a horror/suspense film, probably didn’t do justice for the fans of the TV show

As I said before, I thought this started off pretty good. It kept my interest with the characters and their fantasies. However, the conclusion was so bad. It’s like having a great appetizer and entree, but the worst dessert ever. It’s a shame really, it’s like they had great writers at first, but they all quit, and got amateurs to finish it. Regardless, I believe the TV show is still much better!!!