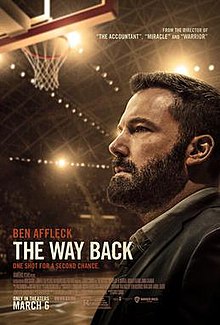 The Way Back excels in its character development and acting, but the story follows the sports movie formula!!!

-The best part of the film is seeing Ben Affleck play the part of Jack Cunningham, an alcoholic construction worker with past demons in his life becoming a head basketball coach to his alma matter, I thought Affleck played the role very genuine, and seeing him trying to get his life back together gives it a sense of realism for his character, the best part of the movie
-I also enjoyed seeing the acting chops from comedian Al Madrigal in a dramatic role, I thought he carried himself very well, and actually made me believe he is a legit assistant basketball coach, I actually enjoyed his supporting character very much

-With all the dramatics on character, this is a basketball sports movie, and man does it follow all the cliches in a sports movie, most notably the part of a team that is not a good team, and one man makes them to a great team, with all that said, being a basketball coach myself, I’m a sap for these things, because I still find them inspiring, and I can relate to some of the issues this team can go through

-The character twist in the end is somewhat tragic, without giving too much away, the ending did left me a little unsatisfied, mainly for the character of Jack Cunningham, sometimes sad endings are not merited, and this was one of them

Yes it is a sports movie with all the cliches and typical formulas. However, do watch this movie for the acting of Ben Affleck and the characterization of his character jack Cunningham. To me that is worth the watch even though I hated the way it ended. Regardless, it is something worthwhile to see for me!!!